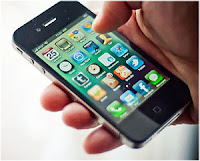 The iPhone is an Internet and Multimedia Enabled Smartphone Designed and Marketed by Apple Inc. An iPhone can function as a video camera, A camera phone, can send texts and receive visual voice mail, A Portable media player and an Internet client with email and web browsing capabilities, and both Wi-Fi and 3G connectivity.
The user interface is built around the device's Multi-Touch Screen, including a virtual keyboard rather than a physical one. Third-party as well as Apple application software is available from the App Store. These apps have diverse functionalities, including games, reference, GPS navigation, social networking, security and advertising for television shows, films, and celebrities. iPhone is the Hot Smart Phone Choice of Every Individual.
There are four generations of iPhone models, each accompanied by one of the four major releases of iOS or, iPhone OS.
The original iPhone was a GSM phone. iPhone 4 having both versions GSM as well as CDMA version. The touchscreen is a 9 cm and iPhone 4 has a resolution of 640 × 960 at 326 ppi.with scratch-resistant glass. The bottom of the iPhone sports a speaker (left) and a microphone (right) flanking the dock connector. The iPhone features an internal rechargeable battery. But the battery is not user-replaceable. The iPhone can be charged when connected to a computer for syncing across the included USB to dock connector cable.