Google panda is the Google's new algorithm which aims to detect the site which having copied content and penalized them. Many of the sites has lost their rankings because of the copied content but it remain a blessing for the unique content holders.
Google Panda refers to the changes introduced in 2011 to the search algorithm used by Google to improve Internet search results. The change aims to lower the rank of "low-quality sites" in search results and return high-quality sites to Google's users. 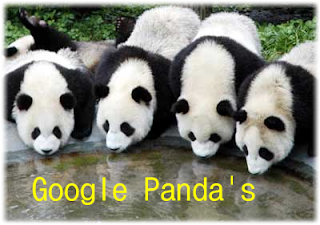 Soon after the Panda rollout, many websites,including Google's webmaster forum, became filled with complaints of scrapers/copyright infringers getting better rankings than sites with original content. At one point, Google publicly asked for data points to help detect scrapers better. Google's Panda has received several updates since the original rollout in February 2011, and the effect went global in April 2011. To help affected publishers, Google published an advisory on its blog, thus giving some direction for self-evaluation of a website's quality.
If you feel like you’ve been unjustifiably hit by the Google Panda Update, Google recommends that you let them know in this forum thread. For other resources, that may help you, we recently created this Delicious stack of Panda resources (which by the way is still a work in progress. Feel free to share other resources you think would be helpful, and we’ll consider adding them).